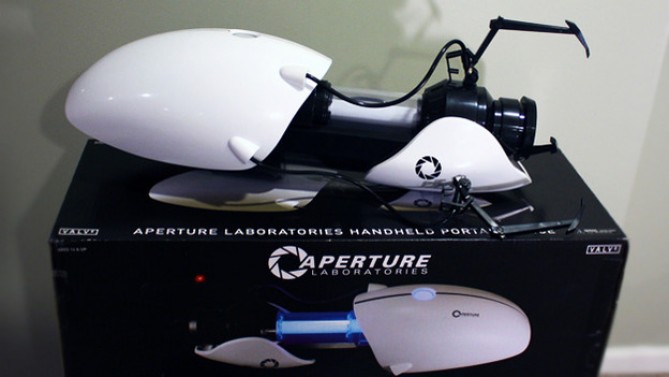 When NECA first announced that they would be producing a 1:1 scale replica of the Aperture Science Handheld Portal Device or “ASHPD”with lights and sound system for a mere £100, the response was overwhelming. However, when NECA announced they were only going to be producing 5000 units, a dark cloud hung over the heads of the not so hard-core collectors. Pre-orders sold out almost immediately in my home country of the USA and anyone left behind was forced to look to eBay, where price gorging was already rampant or to the expensive path of importing theirs from another country.

Thankfully the replicas were not quite as sparse here in the UK and I was able to snag my own personal unit for review purposes.

First and foremost, I would like to warn potential buyers that any web stores that are advertising the replica as being in stock are most likely scams, as all of the official retailers are sold out. So please be wary if you’re looking to grab onethis late in the game. If you weren’t lucky enough this time around, it’s worth noting that NECA will be releasing another version of the gun later in the year that is modeled after P-Body’s gun from the CO-OP section of the game. This model features a different set of lights to correspond with the character, along with a snazzy new paint job, so not all hope is lost for those of you who missed out on this particular unit.

Anyways, now that all of that is out of the way we can talk about this particular model and just how awesome it truly is.

When my unit arrived last Wednesday, I was surprised by just how light the whole package felt and was a bit worried that the item would feel slightly cheap. The box that the gun shipped in showed a few signs of wear due to shipping but the gun it self had suffered no damage and was very well packaged. Thankfully, my worries about the quality of the replica were put to rest after I got the gun into my hands. The weapon was initially a little light in the hand, but this was relieved after I had inserted the three ‘C’ batteries that were not included in the package.

WOW. The gun now felt properly weighted and more like and actual weapon in my grasp and this was all down the craftsmanship that NECA put into this product. From top to bottom, the product is a perfect recreation of the ASHPD Portal Gun from the video games and not a single detail goes missed. The stark white outer casing is a sleek and curvy piece of work that fits in and around your hands like a glove. The black claws on the front of the rig are hinged, allowing the person who wields this beast to position them exactly as they see fit. Even the glowing red LED’s on the claws are present on the replica, which was a feature that I didn’t even realize existed on the original article at first.

If your brave enough to look directly into the operational end of the device you will find that the ‘portal nozzle’ as I call it, has the same pattern inscribed on it’s lens as the turrets do in the game. This was a neat touch and one that I wasn’t honestly expecting, seeing as how you never actually see that part of the gun while playing the game. I was also curious as to what the handle underneath the shell of the gun would look like, since the perspective of Chell is obviously restricted during the game. I was surprised to find that the underside of the gun was a bit chunkier than one might have expected, with a large barrel shaped drum hanging in the undercarriage. This seems to have been created out of necessity however, as NECA needed space for the batteries that power the high quality lights and sounds.

Now lets move on to the coolest part of the package. The handle on the underside of the replica is fitted with a three-way switch to adjust the lights and sounds as well as a trigger, which activates the firing sounds. Push the switch up and you find your gun glowing a nice warm orange colour that is very pleasing to the eye. Move the switch to the downward position and you are greeted with an iridescent blue hue, which is almost too bright to look at directly if you’re in a location with low light. Both Orange and Blue options have not one but two distinct sound patterns that seem to be ripped directly from the game.

If I were to complain about anything to do with this gun, it would have to be that NECA does not sell a display stand for the item. I know that sounds like a minor issue but due to the shape of the replica it is difficult to display properly at the moment. I had to resort to sticking a big hunk of stickytack under the front of the gun or risk damaging the cables that run alongside it. It is an unfortunate oversight that without some kind of prop, these cables will bear the weight of the weapon and this would more than likely eventually lead to a deformation of their natural shape.

Now this is obviously just me being overly critical and I’m sure their will be a third party stand for sale soon that will get my portal gun looking oh so snazzy a-top my display case. All in all,I cannot recommend enough what is surely NECA’s best work yet to any prospective collectors out there. From the iconic glowing orb, to the sleek pinstripe paintjob the adorns it’s back and perfectly positioned aperture logo’s, it’s all here. This is ultimate Portal themed collectors item and even if you have to shell out an arm and a leg for one now that they’re sold out, it will definitely be worth the investment for both collectors and cosplayers alike.