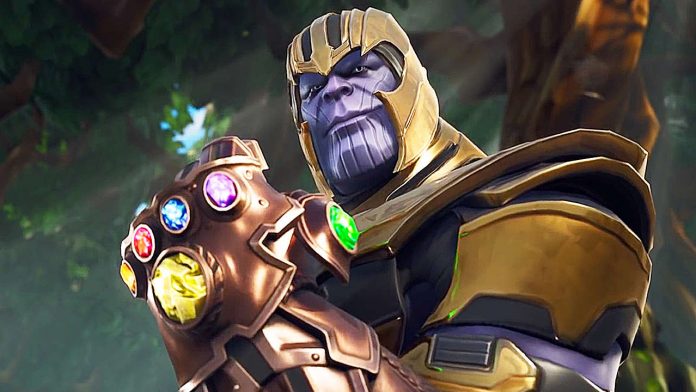 Fortnite have amped up their interest with the involvement of Thanos and the Infinity Gauntlet. This comes weeks after Marvels incredible release of Avengers Infinity War. Some users have agreed that Thanos may be the best villain in the entire series to this date.

Fortnite have recently released a patch in which players can get there hands on the infinity stones. If you want to know how to do this : Listen up!

In each match of the limited-time Thanos mode, one lucky player will get to use the villain’s powerful Infinity Gauntlet. You’ll get to play as Thanos until you either win or die, and he’s very strong. He has 700 health and 300 shields, and can jump high into the air after a short power-up time. [Update: He’s already been slightly nerfed.] But how do you get to play as the Mad Titan?

There’s no surefire way to get the Infinity Gauntlet every time, but there are a few things you can do to improve your chances. Stay on the Battle Bus until you reach the edge of the circle–in which the Gauntlet will spawn after approximately two minutes–then fly toward the middle of that circle. You want to stay airborne for as long as possible, but below other players vying for prime position.

You’ll hear a sonic boom to signal the Gauntlet’s spawning; it arrives by way of a comet crash. If you stayed around the center of the circle you should be in a decent spot to get to the device, no matter where it spawns. Aim ahead of the comet and try to get to the Gauntlet as quickly as possible. Players are notified on the compass of where the Thanos player is at all times, making them a big target.

If you miss out though, don’t worry: you can still play as the villain later in the round. If Thanos dies, he’ll drop the Gauntlet, and whoever gets to it first can take over evil responsibilities for the remainder of the match. For more on the limited-time event, check out some of our Fortnite: Battle Royale Thanos gameplay.